The Green Rush gets its name from the Gold Rush in North America during the nineteenth century when the economy boomed and people from across the world flocked to North America to make their fortune. Similarly, the green rush indicates the economic prosperity that has resulted from legalization of cannabis in North America.

An important day for the cannabis industry in the US was December 20, 2018 when the Hemp Bill was passed. This bill removed hemp from being classified under the controlled substances category and made it an ordinary agricultural commodity. This came as good news for farmers as they were now eligible for federal agricultural grants and water rights. When we talk about the cannabis industry, it includes medical, recreational, CBD oil, infused products, edibles, and other related products that contribute to economic growth.

Canada legalized both medical and recreational cannabis on October 17, 2018 making it only the second country in the world to do so. Comparatively, in the US, 33 states have legalized medical use cannabis and only 11 states have legalized recreational use. States permitting recreational use are Alaska, California, Colorado, Illinois, Maine, Massachusetts, Michigan, Nevada, Oregon, Vermont and Washington. Colorado and Washington were the first to legalize pot in 2012. After pot was legalized in Colorado, it experienced the economic benefit of the green rush right away. By June 2014, it had issued 2,917 licenses for cannabis related businesses and 41,076 licenses for individuals to work in the cannabis industry. A report from the Colorado State University-Pueblo’s Institute of Cannabis Research stated that in 2017, the legal cannabis industry contributed more than $80.8 million to the state through taxes and fees. In 2019, the state collected more than $302 million in taxes and fees on medical and recreational cannabis. Another report suggests that 25% of people who traveled to Colorado between 2013 and 2018 were cannatourists. Marijuana legalization revenue accounts for roughly 3% of the state’s $30 billion budget.

Another major factor impacting the economy is cannabis migration- when people move to a state where the industry is legalized, and people have easy access to both medical and recreational use. Between 2005 and 2009, Colorado saw an average of 187,600 people move there each year. After legalization, there was an 8.2% increase each year in the number of people moving to the state. By 2015, Colorado’s overall population had increased by 3.2%. A research conducted by Marijuana Policy Group stated that in 2015, Colorado saw the cannabis industry generate nearly $2.4 billion in retail sales and the spillover effects on the economy. This translated into increased demand of local goods, purchase of irrigation equipment, renting warehouse space and the dependence on other professions like lawyers, accountants, contractors, and consultants required to run businesses.

According to Grizzle, a research company from New York, a person on average buys $280/year of cannabis in Colorado, $220/year in Washington and $130/year in Oregon. Colorado levies a 2.9% retail and medical sales tax, 10% retail marijuana sales tax and a 15% marijuana excise tax while Washington has a 37% sales tax.

In January 2020, Illinois became the most recent addition to the states that legalized pot. Illinois is the sixth most populous state & second most populous to legalize marijuana. Illinois dispensaries have sold nearly $110 million in recreational marijuana since full legalization in January. 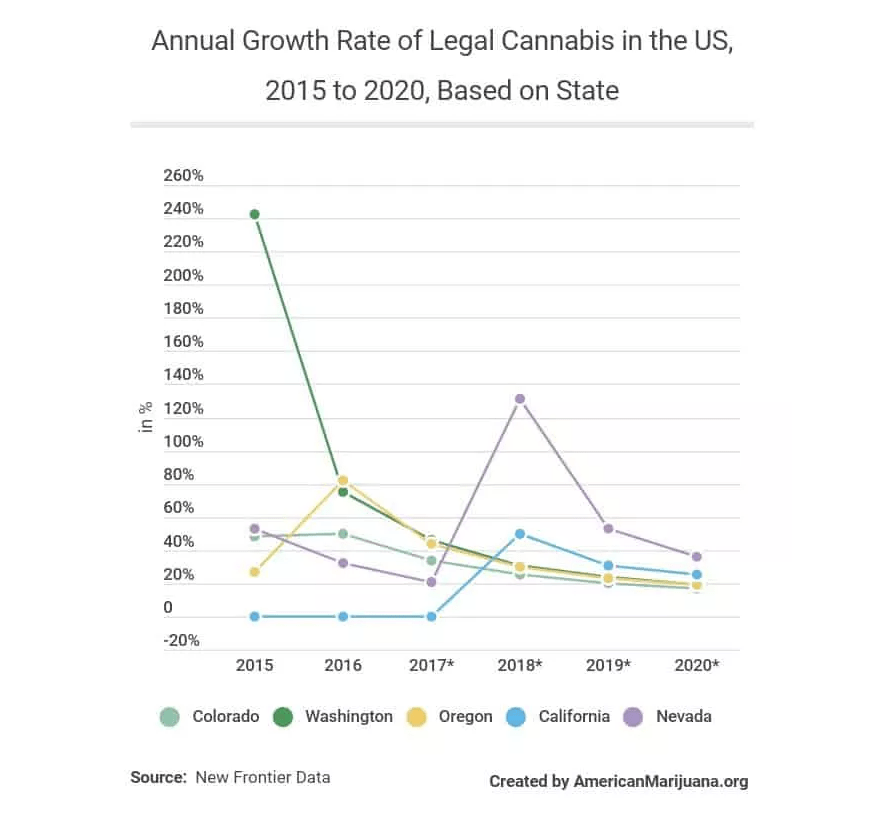 Almost 30% of the population of the US lives in the 11 states where pot is legal. This could be one of the reasons for the growing public support for marijuana legalization. As more people consume it, they begin to appreciate the health and wellness benefits of cannabis. Out of 65% people who buy over-the-counter pain relief medication, more than half of them are willing to try cannabis as a substitute. With more states legalizing it, and medical marijuana becoming easily accessible, more people are willing to try it and make it a part of their lifestyle. According to a report by Nielsen Market Insights, 1 out of 5 beer drinkers spend less on store bought beer due to consuming cannabis. Another report said that 41% of tobacco smokers would consider using cannabis to quit tobacco. When you consider the overwhelming healthcare, costs associated with alcohol and tobacco, this shows another overlooked contributing factor to the economic prosperity being provided by legalized cannabis.

A Nielsen report also showed the increase in the number of marijuana brands in Colorado, Washington, Nevada, and California combined. From 166 brands in 2014 to almost 2650 in 2018, there has been a massive growth since legalization. 2016 saw investments worth almost $477.96 million in the legal cannabis industry. According to New Frontier Data, the cannabis industry in 2017 employed almost 250,000 people, which was more than four times the number of coal industry workers in the US. In 2019, it has increased to almost 340,000 people. According to Arcview Market Research & BDS Analytics, in 2019 sales in the US were $12.2 billion and will further increase to an estimated $31.1 billion by 2024.

As more people have access to legal marijuana, entrepreneurs and businesses become more interested/willing to offer cannabis-based products and services. But as federal law still classifies marijuana as a controlled substance, all the dealings and operations are cash only. This makes it difficult for entrepreneurs and new businesses to get financial assistance or business loans from banks. All signs point to marijuana eventually becoming legal on a federal level, which will bring with it financial prosperity and growth not seen since the days of the early North American gold rush.